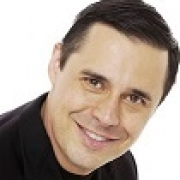 A seemingly "ordinary guy," Ruben Gonzalez wasn't a gifted athlete. He didn't take up the sport of luge until he was 21. Against all odds, four years later he was competing in the Winter Olympics. At the age of 47 he was racing against 20-year-olds in the Vancouver Winter Olympics! Ruben speaks from Olympic experience. He teaches the personal effectiveness system he used to achieve success again and again in both the Olympics and in business. From Dubai to Toronto, from Hanoi to Cancun, from Singapore to Africa, Ruben has inspired and motivated audiences around the world. His client list reads like a Who’s Who of Corporate America: Dell, Coca-Cola, Farmers Insurance, Ortho McNeal, the Million Dollar Round Table, Oracle, Wells Fargo, Century21, and even the U.S. Treasury Department! Ruben has shared the stage with speaking legends Zig Ziglar, Denis Waitley, and Tom Hopkins. They've hailed him as a leader of a new generation of personal development speakers. As a Four-Time Olympian and internationally recognized expert on developing mental toughness, Ruben Gonzalez knows how to achieve success again and again. A master storyteller, Ruben uses his Olympic experiences to inspire audiences to think differently, live life with passion and have the courage to take the necessary steps toward their goals - to push beyond self-imposed limitations and to produce better results! His book, "The Courage to Succeed," has been endorsed by Lou Holtz, Stephen Covey, Ken Blanchard, Brian Tracy, and Dr. Robert Schuller. Armed with the same energy and dedication that he put into his athletic career, Ruben Gonzalez brings to audiences of all sizes and backgrounds a truly unique, truly memorable performance that teaches as it entertains, and inspires as it motivates. Because of his powerfully inspiring story, Ruben was selected to carry the Olympic Torch at the Salt Lake City Olympics.